Yamaha R15 V3 price Hiked – The third generation R15 v3 has received price hike of Rs.2000, because of high demand and waiting in delivery. Yamaha R15 V3 is powered by 150cc engine.Since it was  launched the monthly sales of yamaha R15 is increased from 3000 units to 7000 units, Now the ex-showroom price of yamaha R15 V3 is Rs.1.27 lakh. While yamaha does not disclose reason why they increase their bike price. 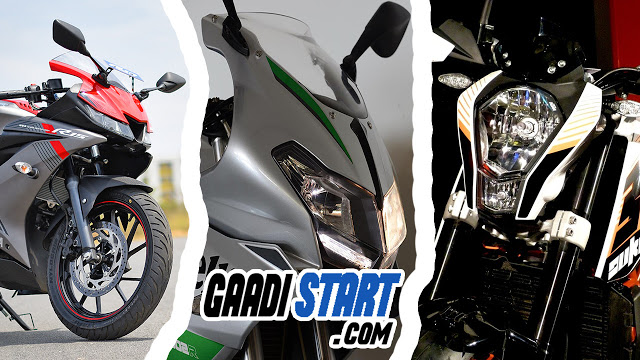 As per new government rule the manufacturing of Non-ISI helmets will be ban, if someone salling of non-ISI helmets then they will punish.

The austrian bike manufacturer say they will replace a couple of faulty components and fix some issue which are reported by KTM Duke 390 customer. The KTM has requested that the owner who have 2017-2018 models they will visit their nearest KTM dealership for the Monsoon kit fitment.Apart from that, some faulty components will also replace.
The Monsoon Kit will include the installation of a new ECU bracket which will protect it from water and dust.

BENELLI TIES UP WITH MAHAVIR GROUP :-

Italian bike manufacturer company benelli has recently tie up with Mahavir group. Mahavir group is generally Hyderabad based company which assemble, manufacture and sell its motorcycles. As per news company is allowed to start its own manufacturing plant in medichal, hyderabad.

HMSI introduced its NSF 250R to the world of indian motorsports. This move will help aspiring racers train and align themselves with international standards.