CRDI VS TDI ENGINE – Which Performance and Mileage is better 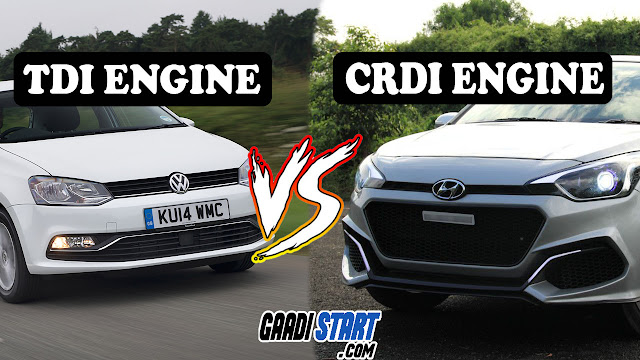 CRDI VS TDI ENGINE – If you have your own motor or car, you are cool; but what is the use of having one if you don’t know anything about engines. To keep your motor or car at its best performance, you must know something about it so that you may take the appropriate actions or measures when things go wrong. Plus, you can address the needs of your car personally if you don’t want anyone to touch your most valued possession. If you are a geek on engines and cars, you are probably familiar with the terms CRDI VS TDI” “CRDI” is for “Common Rail Direct Injection” while TDI is for “Turbocharge Direct Injection.”

These two are designs for your diesel engines. These engines can be suitable for your car, truck, or even passenger automobiles. The difference between CRDI and TDI will be tackled in this article.

More About CRDI VS TDI :-

Common rail direct injection or CRDI is now a widely accepted design for diesel engines. Like any other diesel technologies, CRDI has proven to be fuel efficient and boosts the engine’s performance. It has a common rail design with the tubes connected to all injectors. This design is one step ahead from  past designs. With CRDI’s technology, less fuel is waste in the unuse system since the fuel inside the common rail is set in a certain amount of pressure that breaks down the fuel to its smallest particles. This method allows the fuel to combine with air more efficiently. CRDI serves as the control center of your car, truck, or any motorize vehicle. It is the head which controls several factors. This includes the amount of fuel to be release, the timing of injection, the timing of the charge, and its pressure within the common rails.

According to some relevant studies, CRDI has increase the performance of diesel engines by 25 percent. According to those people who are CRDI users, CRDI has greatly reduce their automobiles’ engine vibration, thus allowing the vehicle to run smoother and quieter. With this, it also reduces the operation cost. Though CRDI is just a bit more expensive than other diesel engine technologies, you can save a lot in the fuel costs since less fuel is waste.

Turbocharge Direct Injection, or TDI, is a turbo diesel engine design that has the features of turbocharging and cylinder direct fuel injection. It was develop by the popular Volkswagen Group in Europe. TDI has very select compatible automobiles, especially for those vehicles produce by Volkswagen. TDI is compatible with Volkswagen’s passenger cars, light commercial automobiles, and marine engines. How does TDI work? TDI uses direct injection. It is a method where in atomize fuel is directly spray into the engine’s main combustion chamber through a fuel injector. With TDI’s turbocharger, there is an increase amount of air that can enter the cylinders. There is also an available inter cooler that can lower the engine’s temperature which makes it possible to increase the amount of fuel that can be inject and combust. As a result, your engine has more power and greater efficiency. TDI has a low surface area which reduces heat loss, thus increasing engine efficiency with minimal combustion noise.